Several prominent Russian journalists have been charged with violating laws on protesting and social distancing, after being temporarily detained on Thursday in Moscow. They had been holding separate solo demonstrations in support of a jailed colleague, according to statements from their employers.The detentions sparked outrage among local journalists and activists who argue that solo demonstrations are not forbidden by law and accuse local authorities for using the coronavirus lockdown as a suppression tool.At least eight people were detained then later released on Thursday, including Sergey Smirnov, chief editor of MediaZona, an online outlet that covers criminal justice and police activity in Russia, and journalists Tatyana Felgenhauer and Alexander Plushev of the Ekho Moskvy radio station.All detainees have been charged with violating laws on protesting and six have also been charged with breaking the self-isolation restrictions, which could result in fines or jail time. The court hearings are expected within the next two weeks 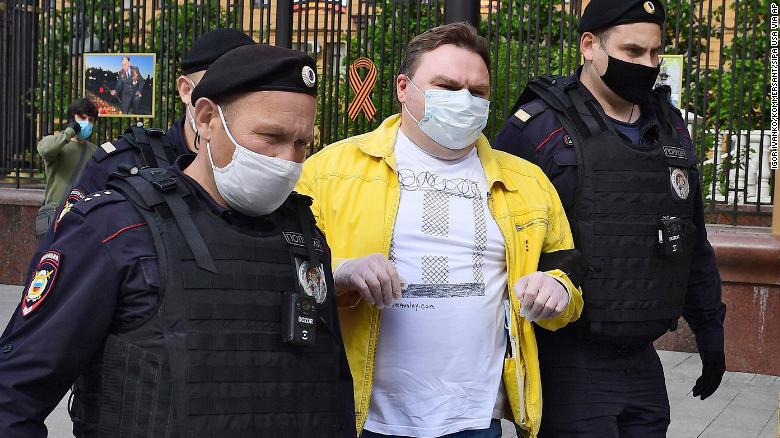 Alexander Plushhev was holding a one-person protest, according to a statement from his employer.The journalists had been protesting the arrest of Ilya Azar, a prominent journalist and activist in Russia.Azar was jailed for 15 days on Wednesday following his own solo demonstration in support of Vladimir Vorontsov, a former police officer who runs an outlet dedicated to exposing abuses within law enforcement.Police said at the time that Azar was being detained for violating a ban on mass gatherings during Moscow’s lockdown, meant to slow the spread of coronavirus. He was subsequently charged with “repeated violation of laws on protesting.” 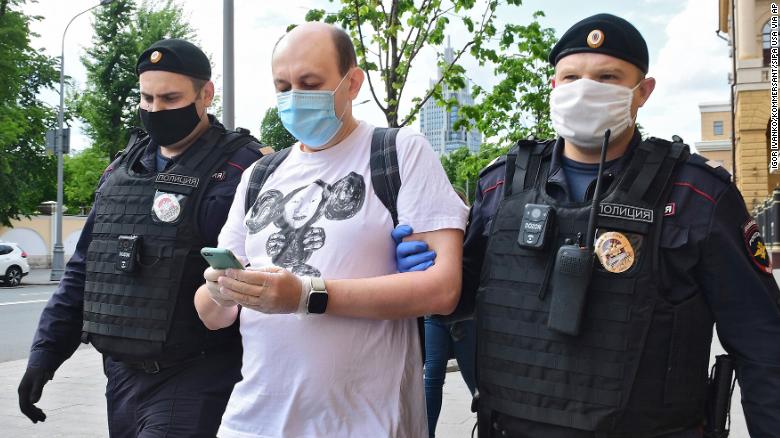 Sergey Smirnov, the chief editor of MediaZona, an online outlet that covers criminal justice and police activity in Russia, was also detained.”Obviously you can’t hold mass demos amid the pandemic in order to prevent further spread but a one-man protest is not a mass demo, either in its form or idea,” Azar wrote on Facebook before his court hearing on Wednesday.”To sum it up, using the pandemic and the general fear and apathy as cover, the people in power multiply their illegal acts,” Azar added. “They are seriously discussing holding the military parade in June but I will be punished for a one-person demo.”The Interior Ministry did not immediately respond to CNN’s request for comment.On Friday morning, Moscow police issued a warning saying anyone who participates in protests will be fined or put under administrative arrest, citing Mayor Sergey Sobyanin’s order on “increased alert” in the city, which bans public events.But the solo protests continued, spilling over to other Russian cities. On Friday, at least eight people were detained outside the Interior Ministry headquarters in Moscow, and several journalists in the Siberian cities of Yekaterinburg and Novosibirsk came out in support of detained colleagues.Journalists Felgenhauer and Plushev were detained again while covering the protests, according to a tweet Plushev sent from a police bus.

SEE ALSO:  How an article about Elrufai's wife's reaction to her son's threat to "pass" around someone's mother led to the Deputy Editor of Brittle Paper losing his job

The head of the Russian branch of Amnesty International, Natalya Zvyagina, called the arrests “a cowardly” move against civil rights activists.”The authorities hypocritically limit public events under the pretext of the pandemic by arresting solo demonstrators who do not pose a threat to anyone but the authorities as their abuses are being uncovered,” Zvyagina said in a statement Thursday. “The demonstrators are being thrown into overcrowded cells where they are risking getting infected with Covid-19.”The discontent regarding the criminal proceedings against Vorontsov has been brewing for several weeks.Vorontsov’s apartment has been raided at least three times since he retired from service in 2017, with police confiscating his computers and phones, according to state media.He was detained on May 7, when a special task force stormed his apartment descending on ropes from the roof of his residential building, according to his wife’s account of the raid.He was then jailed for two months and is currently awaiting a verdict on two separate charges involving extortion and illegal distribution of pornography, state-run news agency RIA Novosti reported at the time, citing his lawyers.Vorontsov denies these charges, saying the case is politically motivated and linked to his activism.His platform, called “Police Ombudsman,” has amassed about 500,000 followers on social media. Vorontsov has been hailed as an unofficial union leader for law enforcement officers as the project reported on a suicide wave among police, caused in part by what it called a “race for crime solving rate,” and published other stories about a hostile work environment and overwork among officers.

SEE ALSO:  Another lady killed in Port Harcourt with white handkerchief tied on her neck (photos)

We Sell Advertising Space Contact Us by Clicking on The Banner Enquiry.